Su Sanni is the founder and CEO of Dollaride, a company committed to reviving the concept of dollar vans as a way to assist underrepresented communities in New York City who do not have the best or easiest access to public transportation. The concept of dollar vans, for those who are unfamiliar, consists of only paying one dollar to travel to a specific local location. This could benefit locals of an underrepresented community greatly by providing a cheaper means of transportation to get them to the workplace, school, etc.

When reminiscing on his experience with growing up as a native New Yorker, Sanni uses the term “transit desert” to illustrate the challenges of commuting in East New York, Brooklyn and Jamaica, Queens, neighborhoods he has both grown up in and lived in. He recalls having to walk 20-30 minutes just to find the nearest subway and in his words, “waiting an inordinate amount of time for the nearest bus just to go to school, to go to a hospital, or to visit friends and travel around the city.” This experience is what ultimately shaped his mindset when it came to access, equity, and mobility. However, the idea to start his Dollaride enterprise did not come about until 6 or 7 years ago when Sanni discovered his uncles had been dollar van drivers in the 1980s and 1990s. Starting off this way is what has allowed them to thrive as the successful business owners they are today. It was in this moment that the opportunity opened up to Sanni as he realized that he, as an entrepreneur, had the necessary resources to magnify the business with the technology necessary for modern day

Although the company is still in its start-up stage, they are working within specific areas of New York City. In order to access a ride users would first need to download the mobile app available on the App Store and Google Play. Passengers would download the rider app where they could see where the nearby dollar van vehicles and routes are that can help get them from one location to the next. This platform is what Sanni says will set his business apart from common transit apps. It will be developed in a way where it is not difficult to use nor understand. In regards to routes, Dollaride is only currently servicing those in Queens, New York. Within Jamaica, Queens specifically they have created a route that is entirely their own to travel throughout the borough along with 4 pre-existing routes as well. In Brooklyn, they are attempting to create a network of routes by communicating with over 100 drivers pertaining to routes that have existed for over 30 years. In this sense, Dollaride is essentially starting out within local communities where dollar vans have been common for years, to then accelerate their way into future locations. 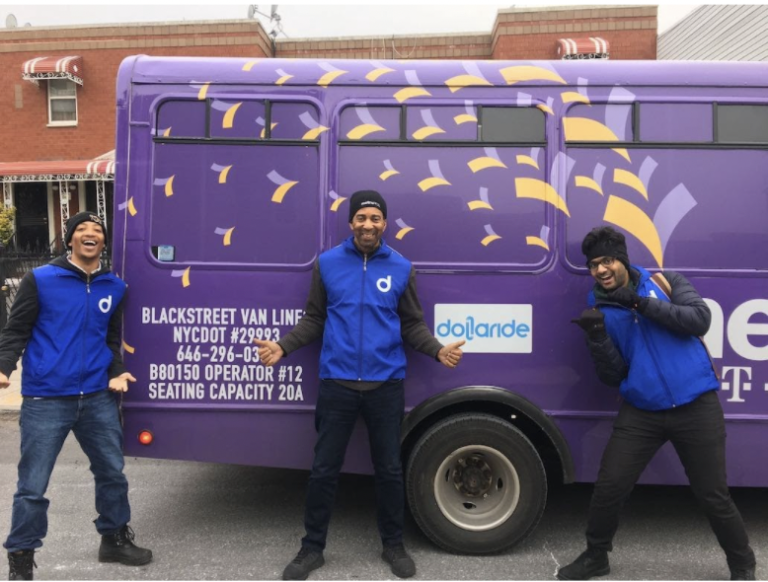 For this reason their motto and mission is “say goodbye to transit deserts.” In Sanni’s words, “another way of thinking about this is that it is these areas where people have remarkably limited access to public transit, so we want to eliminate these types of transit inequities because we believe it can unlock a lot of growth and mobility for the people who live and traverse these areas.” This company can ultimately be considered a mobility company aimed to provide easier access for those who commute in underserved areas.

In order to succeed however, Sanni looks to his experience as a student athlete growing up and notes the sense of perseverance that he needed then that he has learned to maintain until now as an entrepreneur. He specifically remembers one of his coaches telling him that he would need to have a short memory for the position he played, which at the time was defensive back. He recalls, “what he meant by that was you are going to get beat at some point and there is going to be at some period of time, if not often, where the offense is going to take advantage of your weaknesses or one up you and you might lose on a certain play, but your ability to rebound from that setback within seconds and be prepared for the next play to overcome that challenge and finally shut down that receiver or execute your own job effectively is the hallmark of success and being a good player.” This is the same mentality he now keeps as an entrepreneur when pitching to either investors or the market in general. He knows he can be told no at any moment but can not let that bring him down. It is this perseverance that has allowed his business to thrive thus far and continue to thrive into the future.

However, this success does not mean that failures are inevitable. Sanni himself says he has had countless failures that he now sees as learning opportunities. He specifically recalls a moment in time where he suffered from an intense fear of public speaking and was left to pitch the previous company he founded called “We Did It” to a large group of people. He ended up forgetting his lines throughout the pitch because he was so nervous. Instead of looking at the experience as a complete failure, he saw it as an opportunity to learn and grow. From that day forward he worked on his public speaking skills and is now able to confidently speak about his company, and as previously mentioned, persevere in the face of obstacles.

He could not have done so entirely without the help of the Tech Incubator at Queens College, however. Sanni first participated in the PitchFest about three years ago where he was lucky to be one of the three winners. Since then he has participated in all the mentorship, meetings, and workshops that have come. In addition, he reconnects with employees at the Tech Incubator as well as Executive Director Ying Zhou. Through his work with the Tech Incubator, Sanni has been able to develop a partnership between Queens College and Dollaride as a way to provide transportation services to The Knight’s Table, a mobile pantry program at the college. According to Sanni, “At the Office of Student Affairs, they have hired Dollaride to provide transportation and help some faculty members distribute groceries and food and things like that to students on campus.” Students have also had the opportunity to intern at Dollaride within the past couple of years. As his relationship continues to grow with the Tech Incubator, as well as Queens College, Sanni hopes to keep providing this opportunity among many others for students to come.