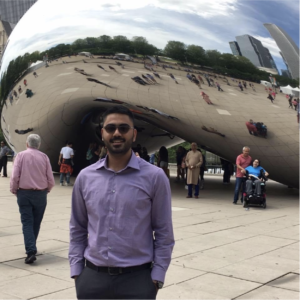 Muhammad Raza is a former intern at the Tech Incubator at Queens College. After graduating from Queens College in the Fall of 2020 he pursued a career within the field of software engineering. He now currently works as a professional services consultant at AWS.

When he first began working at the Tech Incubator the fall of his sophomore year, he was helping to build a tech community and a tech environment where others could learn technological skills or be motivated to follow something outside of their classes. In addition, Muhammad also assisted in building projects and hosting a summer camp for kids where they were taught regular computer or programming skills. In Muhammad’s words, “We didn’t work on one thing. We worked on various things like teaching classes, hosting tech events, or maybe going out to different tech events too to basically represent  QC to show them what we are doing at TIQC or maybe inviting guest speakers from industry to talk about what they’ve been doing in the industry.”

By experiencing these multiple positions within the tech Incubator, Muhammad was also able to build an incredible amount of skills that have served him even after graduating college. He notes that before working at the Tech Incubator he was not good at public speaking as he lacked the necessary confidence. However, once he began working as an intern, he was given the opportunity to speak in front of others. He was able to do this by speaking publicly during sessions and classes hosted by the Tech Incubator. He acknowledges this as one of the biggest skills he learned at TIQC given the fact that he sees it as extremely valuable and necessary for all aspects of life.

After his internship ended, Muhammad would still host some events with executive director Ying Zhou here and there. But his ultimate focus was looking for other internships. His first internship was at CUNY where he worked as an intern helping to build a system that would allow CUNY to conserve energy. After interning there he then worked at JP Morgan Chase where he assisted in helping production engineers build a search engine which helped them look at production issues in a better and organized way . This internship was also a little different as it took place out of state and in Chicago. Illinois. After returning from that internship,. Muhammad returned to TIQC and began hosting data science sessions where he would teach people skills required to pursue data science. After graduating college however, he went back to working in a bank setting at HSBC where he worked as a data science intern. While working there he received an opportunity to work with AWS as a professional services consultant. He ultimately decided to take a gap year after graduating despite this opportunity. But, fortunately, he plans to begin his role as a full-time employee at AWS within the following week.

Although Muhammad has had a tremendous amount of help from the Tech Incubator, he also carries his own attributes that have contributed greatly to his success. He notes that what has kept him afloat is his passion and hunger for learning. He ultimately highlights the way in which technology moves fast and is ever-changing within our society. In order to move along with the changing technology, he says to always be passionate and eager to know more while also keeping some outside hobbies to keep yourself balanced.

However, this does not mean that failures are completely avoidable. Although Muhammad does not think he has experienced his biggest failure yet, he does acknowledge that he has experienced various minimal failures along his journey to success. Of these failures, one was his lack in thinking long-term because of current difficulties. But, these failures ultimately serve as learning opportunities, not just obstacles that stand in the way.

For college students he advises them to network as much as they can while also pursuing their own personal interests. Muhammad says, “don’t go with the flow, learn the things you like the most. Do stuff that you like the most.” This is what will ultimately bring about the experience and skills necessary in order to be successful in the most authentic way possible.

Connect with Muhammad through: