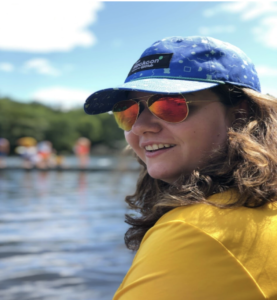 Growing up Margarita’s family and her moved around a lot.” from the U.S to Greece, New Zealand, and Australia,” she has travelled around the world. However, after returning to the U.S, Margarita decided to settle down and attend Queens College, following in her father’s footsteps. When speaking on her experience she says, “ was very lucky that I got into Queens College. I was very happy about that.”Two years after starting college she then meets Ying Zhou, Executive Director at the Tech Incubator.  Margarita says, “She started talking to me about everything the Tech Incubator did, and I was like OK cool, let’s get started.”

When she began her internship, Margarita  was getting out of a rough patch in her life. She was a full-time student working four jobs and eventually, this led to a decline in her health. This also ultimately caused her to fall behind academically in her classes. Though it was a difficult chapter in her life, Margarita keeps a positive outlook and says, “everything happens for a reason, and we need to be a little bit more open-minded that when a door closes a window opens.” We need to see that there’s an opportunity to do something else.”This is a great lesson she learned that has brought her to where she is today. Through this lesson not only did she gain clarity within herself, but she also began to pick up on new skills. While working she became responsible for teaching classes on topics like web design and cybersecurity. “We would go online, learn about it, and then teach them. Other than that, I also worked as a project manager for quite a few of the startups at the Tech Incubator, which was great” she says. While juggling through these responsibilities on a regular basis, she was able to pick up on the usefulness of  time management which helped in not only completing her tasks at the Tech Incubator, but also tasks within her everyday life.

As Margarita continued to teach cybersecurity classes through the Tech Incubator,she formed relationships with great mentors who would later help her in acquiring a job within cybersecurity.  Due to the tremendous experiences and opportunities that she had received through those at the Tech Incubator, Margarita was able to walk into her interview confidently. While she was the only person that didn’t have as many years of profession and experience she knew how much she brought to the table.  When asked why she should be given this job she proceeded to ask,, “OK! So let me ask you then, you seem like a very smart person, would you rather spend two years trying to teach me the tech, or 10 years trying to teach them how to be a good people leader and a good manager?” With an argument like this, you can’t deny a worker’s strength and ability to get their job done. Margarita is ultimately someone who thinks big and wants to expand. In her words, she would like to be the “CEO of Google” and with the  strategies and skills that she had piled up she will be at that level in no time.

When it comes to college, Margarita advises students to take advantage of the opportunities they have as she says “you shouldn’t walk into a room and see people from other schools or people from different backgrounds and think that you’re at a disadvantage just because you didn’t have that benefit. I would say that anything that you do in life, don’t let yourself think you can’t do it just because of factors that you have no control over.” Margarita feels you should always be confident in yourself no matter where you are standing. She serves as the perfect example of doing so. Although she was someone with less experience than everyone in the room, she was still confident in her  worth as a potential employee.Her advice to keep moving forward and not allow your fabricated thoughts to ruin the reality and strength that you hold is what has helped her achieve complete success within her career.

Overall, Margarita went through a long journey of self discovery and put many skills to the test when she joined the Tech Incubator in Queens College. Thanks to her fantastic leadership skills, determination, and ability to pick herself up, she found her way into the cybersecurity field. Margarita likes to use her journey as an example to show others that they should work with their resources and make something out of nothing. Margarita keeps high hopes for her future as we all should too !