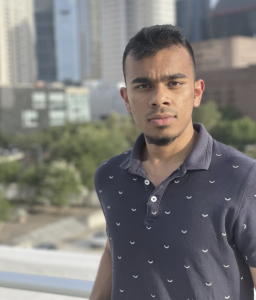 Yasin Ehsan is the founder of The Headstarter and a software engineer for Capital One. Ehsan has always been passionate about helping more people get into the field of tech. He has helped his peers and friends land tech jobs. From this place of passion, Ehsan founded a program called The Headstarter, which helps undergraduates from various backgrounds land job offers.

Within one week of graduating from Queens College, CUNY in August 2020, Ehsan landed on a job at Capital One, thanks to his summer internship there. Ehsan tells TIQC that he decided to complete graduation a year early because of the job offer from Capital One. Since the last two years, Ehsan has been working on projects on “the customer facing chatbot,” the chat option for customers on the Capital One mobile application. Ehsan has gained high praise for his work. Ehsan tells TIQC that he was excited to “work on some machine learning models and see how we can cut costs.” The CEOs highlighted the work of Ehsan and it was also patented. Ehsan compares Capital One as a workplace to his “senior year in college.” He says, “all the peers, managers, and employees I’ve met there have contributed to where I venture next.”

When asked by TIQC about his responsibilities at Capital One, Ehsan tells us that as a Senior Software Engineer, he was responsible for working with different teams, determining the requirements of a project, doing research, and figuring out a pathway for optimal results. It’s a learn-as-you-go project, Ehsan tells us, “it’s all agile; it’s always fun.” Ehsan tells us about the nuts-and-bolts of his position at Capital One: “Capital One might be a bank or financial institution, but we do a lot of tech stuff as well. Lots of tech routines, like 2-week sprints every day. You share updates… Any blocks I have, I share with the team. It’s been an open culture so far.” Ehsan tells TIQC that 16 of his friends have joined Capital One since he started working there.

“If you’re thinking about starting your journey, its ideal time is the earlier time,” says Ehsan. “Instead of thinking about your plans during senior year, better to plan ahead during your freshman or sophomore years,” he adds. Ehsan considers himself lucky to have thought his trajectory through, and he wants to see other people have the same early opportunities as himself. That is why he founded The Headstarter. Ehsan frequented Tech Incubator Queens College during his time at QC. He would come in and exchange information with other members. “There’s just this culture [at TIQC] as if everyone knew each other,” Ehsan describes. He would hear about hackathons and startups from Ying Zhou, Executive Director at TIQC. He decided that he needs to follow these paths as well. This was the origin for the idea of The Headstarter. Ehsan formed a team called the GO Team, and along with his friends he won some hackathons and prizes. The success led him and his team members to internships and opportunities. Hence, he decided to create something similar for other people while fostering the “team ecosystem.” Ehsan and his friends started with a three day seminar in February, where they shared their own experiences on how to land an interview, suggestions on how to pass an interview, how to stand out among other candidates, details about 401K, and business ideas. The team then put together a 7-week fellowship and has since received 60 six-figure offers.

When speaking about the attributes of successful careers, Ehsan points out networking, storytelling, and mobilizing. Ehsan talks about knowing “who to reach out to, asking for something, and then thanking them afterwards.” He describes his mentality as “people first.” Ehsan puts emphasis on following people who are already ahead. He then proceeds to speak about “having a vision, a target.” Ehsan draws attention to honing one’s vision from their college days. What he suggests is to be coordinated, and set up goals for every day that are complementary to the bigger project. These daily goals “bring momentum,” adds Ehsan. When it comes to entrepreneurship, Ehsan has his goals on “big ideas.” He wants to work on something that is long-lasting. He wants a tech business that is sustainable and lasting. He reminiscences about his conversations with Ying, how he would go to her and express his ideas to get her valuable feedback.

We asked Ehsan about failures he learnt from. He describes the time when he pitched an idea for a startup to CUNY Startups along with two others. Their idea was rejected and they were told that being CS majors, the three of them could not figure out the business side of things for their proposal. “After that [event], I declared as a Quantitative Economics major,” Ehsan adds. He then went on to receive the Steven Errera Scholarship from the Department of Economics and he gave a keynote speech at Queens College. He was introduced on stage by then QC President Felix Mateos, who is currently the CUNY Chancellor. After his speech, he had members of the audience who came up to him and gave him their business card. They wanted to reach out if he had any pitches. The audience was primarily QC alums, which only made the experience more validating.

From day 1, says Ehsan, his goal has been tech entrepreneurship. He wanted to attend business school at Baruch College. He realized that tech and business go hand-in-hand. Hence, he decided to major in Computer Science at Queens College. Since then, his experience has only been enriching. Ehsan tells TIQC, “I am young and there is a lot to still learn.” But he keeps his eye on the prize; he wants to become an entrepreneur. He wants to gain some experience in tech, and maybe some more business related roles such as product management, strategy, operations, or even venture capital. He wants to envision something everyone uses, but he wants to make it more efficient and sustainable. What he and his team at The Headstarter are doing is using technology and data to help and improve the career trajectories of others. “That’s the background and the direction,” says Ehsan.

Ehsan doesn’t forget to mention the foundational role TIQC has played in his own trajectory. “I learnt all my code through the Python workshop and the collaborations we had with a data science firm,” Ehsan elaborates. At TIQC, he took iOS programming courses that turned into CodePath sessions. He got to meet Forbes 30 under 30 Sascha Eder while they were at the incubator. He also received his first internship opportunity at TIQC. He approached a group of seniors using incubator space and asked if he could shadow them. What he learnt shadowing these seniors is how to prioritize what is important. Ehsan also extends his warmest thanks to Ying, “who has strived to create an environment that is open and inclusive.” Ehsan remembers his fond memories of TIQC: “You don’t need to swipe your ID to enter, you just knock on the door. There’s a game room; there’s events and support.” Ehsan connects his time at Queens, the borough of the world, and TIQC (which he calls “a gem”). He says, “10-20 years from now, rather than going to some of these top schools, people might think about having their best time here in NYC, especially Queens.” Queens is amazing and TIQC is one of the elements that make Queens amazing, according to Yasin Ehsan.