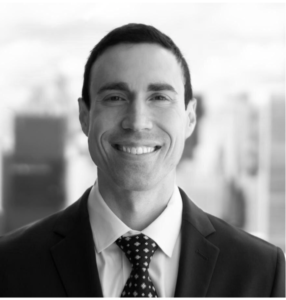 Written By: Christine Garcia
David Goldstein is the CEO and founder of Hydronic Shell Technologies. Born and raised in Queens, New York, he began his career in 2007 as an HVAC (heating, ventilation, and air conditioning) engineer after studying mechanical engineering in college. This experience allowed him to explore a diverse range of projects. He says he designed “HVAC systems for all different kinds of buildings like single family homes and small apartments and things like that all the way up to kind of bigger, more complicated stuff like hospitals, airports, and laboratories.” However, it wasn’t until a couple of years back that he really began to become involved with building retrofits and essentially contemplating ways to reduce their energy consumption and carbon emissions. Later on, NYC took a big step forward as they announced a carbon reduction law that put a cap on emissions from existing buildings. Unfortunately, along with this law came a couple of big challenges regarding having good technical solutions available that are cost effective for building owners. Due to the big market need, Goldstein was able to become very involved and work alongside these business owners in order to help them figure out what their options were. While doing so, Goldstein was able to come to the conclusion that what they needed was a new innovation which is how he came to think of Hydronic Shells. He then quit his job and went to work on his new company Hydronic Shell Technologies. The mission behind this company consists of attempting to transform buildings for a net zero future. The widespread goal worldwide is currently to reach net zero by the year 2050. However, in order to do so, the world will need to retrofit a considerable amount of buildings as buildings are responsible for “about 40% of CO 2 emissions.” But doing this work will not be easy with there being buildings that lack the proper modernization to move forward, specifically the thermal comfort and indoor air quality necessary to first improve the residents’ quality of life. By doing so, he is also presenting building owners with a great investment as they would no longer have to worry about tackling these issues on their own. With these obstacles out of the way, building owners are left with a much more valuable building for their residents. When asked for his opinion regarding if buildings are planning on, or currently using the modular panel, Goldstein explained that while the concept is much more popular in Europe, it is slowly growing in popularity within the United States. This is where the idea of modernizing and ultimately upgrading buildings comes into play as Goldstein says, “a big part of doing a retrofit is also upgrading heating and air conditioning systems in the building, especially when you have these old inefficient heating systems with these boilers burning fossil fuels. You want to get rid of your CO2 emissions and need to replace those with more efficient heating and cooling systems. What we’re doing is integrating our HVAC system into that kind of new facade panel that goes over the building.” 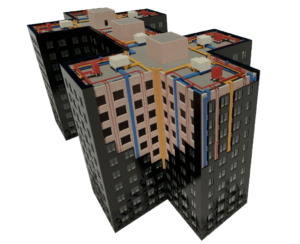 His main inspiration for continuing with this line of work has been the work he was completing before branching out to create his own company. While doing this work, he came to find an innumerous amount of residents living in substandard conditions, especially regarding major issues with heat. He says, “ in the winter, their apartment would be very cold, they would have insufficient heating, and they would have to use temporary heaters, or they would open their stove and run their stove to heat the apartment, which is a huge problem for so many reasons.” One of the reasons could be in terms of the safety hazard that comes with utilizing these things, especially regularly. Additionally, Goldstein goes on to note that these residents also suffer with poor quality indoor air as they have no real ventilation or access to fresh air due to many of these buildings being located next to highways, surrounding them with extremely polluted air. Goldstein ultimately says, “There are so many issues in terms of the quality of life that residents face in these buildings and I have seen that firsthand in meeting these decent, hardworking people and their families, that have to live in these conditions so often. The ability to help people like that and the idea that I have a solution that can improve their lives inspires me and keeps me motivated to work on this.” In addition to the motivation he found while working with residents, Goldstein also owes his startup to his own attributes. Although he does not currently picture himself as a success due to still being within the early stages of starting up his company, he notes that if success were to come his way, it would be due to the fact that he has faith in the work he is doing and believes that it will work. Not only does he believe this work will “have a big impact on the planet and people’s lives” from a technical view, but he does so as well through the trust that he has for himself and his company. Holding this faith and optimism is what has kept him going through the typical ups and downs of starting a company, especially when giving up is the most tempting option. Although Goldstein has yet to face a significant failure, he is not shy about sharing his experience with having experienced a couple of disappointments on the way to success. One of these disappointments he explains he experienced quite recently. The Department of Energy was having a competition for people or companies to submit ideas for new approaches for retrofitting buildings. Specifically, “what they were looking for was the application of robotics, using robotics to help make retrofits more effective and less labor intensive.” He worked alongside two robotics firms and a facade engineering firm to create a team of 12 people that would work on their submission for the competition over a period of several months. Although Goldstein was extremely confident in his submission, he found out months later that he was not chosen to be a winner. From that experience he learned that while it is good to be confident in your abilities and what you are able to bring to the table, it is not a good idea to be overconfident. He says, “You should be prepared for someone else on the other side of the table who might see things completely different from the way you see it, for any number of reasons.” Although Goldstein may always believe in his company and the change it can bring about, others may not believe the same, which is an important lesson he has learned that has kept him moving forward. Additionally, his work with the Tech Incubator at Queens College has also helped significantly. Although Goldstein has not attended any classes or events in person due to Covid-19 restrictions, he has been able to attend virtually. After joining around nine months ago he has learned an incredible amount of helpful tips that have helped with approaching the concept of entrepreneurship differently. He says his biggest resource, however, has been executive director Ying Zhou. He says, “We’re actively looking for funding right now, and she’s been helpful with connecting me with various funding opportunities where there’s different grant programs that are out there and connecting me with various people who might be able to help.” He hopes that this partnership with Ying, as well as with the Tech Incubator at Queens College will continue to prosper as he hopes to visit the campus soon. Not only does he wish to do so in order to meet new people, but he also wishes to potentially help decarbonize the buildings on campus. As far as potentially pursuing other prospects, Goldstein is much more focused on further expanding his business in order to be as successful as possible. He says, “What I’m working on now is potentially such a big thing. If it’s successful, it could easily keep me plenty busy for the rest of my life. We’re talking about a whole new way of constructing buildings, a whole new way of retrofitting buildings, and there’s such a long way that this can go, so much development that can be done.” Although he is currently focused on retrofitting large multifamily buildings, he hopes to soon be able to expand and work on other kinds of buildings as well.